The Last of the Level

Hand #27: Jake Cody had the button. Under the gun, Chris Moorman opened to 65,000, and Brian Roberts three-bet to 150,000 right next door. Everyone folded, including Moorman.

Hand #28: Shawn Buchanan had the button. Dermot Blain only needed to raise to 65,000 to win the blinds and antes.

A Note About Counts

Like the rest of the audience, we're kept a fairly good distance away from the table as it's completely flanked by TV cameras. We'll do the best we can to keep the chip counts updated after big hands, but we won't have exact information until we can get to the table and do some hard counts during the break.

The first one is coming up in six minutes, so look for a fresh batch of counts then.

Hand #23: Chris Moorman held the button to start this hand. Dermot Blain was under the gun and the first to get involved. He raised to 65,000. Everyone folded and Blain won the pot.

Hand #24: Brian Roberts had the button. From the cutoff set, Chris Moorman raised to 65,000. Roberts reraised to 145,000 from the button. Play folded through the blinds and back to Moorman. He folded and Roberts won the pot.

Hand #25: Elio Fox had the button. Shawn Buchanan raised to 65,000 from under the gun. Fox reraised to 130,000. After the blinds folded, Buchanan tossed his hand in and Fox won the pot.

Hand #26: Dermot Blain had the button to start this hand. Elio Fox made it 65,000 to go from the cutoff seat. Blain stepped it up to 185,000 and play folded back to Fox. He leaned over to get a look at Blain's stack and then studied the situation. He eventually made it 400,000 to go. Blain gave another look to his hand, thought and the moved all in. Fox snapped.

The two payers held the same hand, but all four suits were live for possible flushes. There would be no sweat after the flop came down

. The turn was the

Final Eight to the Bracelet

A few minutes ago, Brian Roberts was involved in a quiet conversation, and it ended with him grinning widely and looking rather relaxed. We figured he'd gotten over the little tizzy with the production crew, but his irritability has returned.

Jack Effel just leaned over to Roberts and cautioned him: "You have to show your hole cards."

"You'll get a penalty. It's in the rules," Effel answered. After a moment, he added, "All of the other players are showing their cards."

"Because they're not in the eight seat," Roberts snapped back. He explained his problems one more time to Effel, and they're going to try to work on a solution during the break. The rail is rather high, and Roberts is a bit cornered by the edge of the table and the big stacks of both he and his neighbor Moorman.

Hand #17: Brian Roberts had the button, but it was Moritz Kranich who started the ball rolling from the hijack seat with a bet of 65,000 and he took down the blinds and antes.

Hand #18: Elio Fox had the button at the start of the hand. The action folded around to Chris Moorman who raised to 65,000 from the hijack. Dermot Blain's interest was piqued in the small blind and he three-bet to 180,000. Jake Cody folded in the big blind and Moorman considered the 115,000 question posed to him by Blain. In the end Moorman folded and the dealer shovelled the chips into the direction of the man from Dublin.

Hand #19: Dermot Blain had the button, but once again action started in the hijack seat, and this time it was Brian Roberts with the 60,000 bet and he won the blinds and antes.

Hand #20: Jake Cody had the button and he folded leaving Shawn Buchanan and Moritz Kranich to play a pot in the blinds. Buchanan made up the small change but a Kranich raise resulted in a fold from the man once stuck in a lift.

Hand #21: Shawn Buchanan had the button but once again decided to let the action move onto the blinds. Moritz Kranich made it 75,000 from the small blind and Chris Moorman folded in the big.

It's hard to cold five-bet at a seven-handed table. But Elio Fox just managed it.

Hand #16: Chris Moorman had the button, and Jake Cody opened the pot to 60,000. Moorman three-bet to 150,000, and Brian Roberts four-bet to 300,000 from the small blind. But Fox was thinking sinister thoughts in the big blind, and he squeezed all in on a five-bet shove! Cody had already been looking around the room distracted, clearly not interested in defending his raise, and the rest of the raisers folded in turn, as well. Roberts grinned and stuck out his tongue like he'd bitten into something sour as he folded, not wanting to gamble just yet.

No Flops Here, All Preflop Aggression

Hand #11: Elio Fox had the button to start the hand. Shawn Buchanan raised to 65,000 from under the gun. Action folded to Jake Cody in the big blind and he reraised to 165,000. Buchanan folded and Cody won the pot.

Hand #12: Dermot Blain had the button for the beginning of this hand. Moritz Kranich raised to 65,000 from under the gun. Elio Fox called from the cutoff seat and then Jake Cody reraised to 240,000 from the small blind. Shawn Buchanan folded in the big blind and action fell back on Kranich. He folded and Fox also gave it up, giving the pot to Cody.

Hand #13: With Jake Cody on the button, Chris Moorman opened to 65,000 and Brian Roberts three-bet to 150,000. In the big blind was Moritz Kranich and he four-bet to 335,000. Moorman asked for a count on Kranich's stack while he thought. He then folded before Roberts also gave it up.

Hand #15: Triple Crown chaser Moritz Kranich started this hand with the button. Elio Fox made it 65,000 from under the gun and play folded to Brian Roberts in the big blind. He pulled his blind back and reraised to 170,000. Fox asked for a rough count on Roberts' stack while he thought about the decision. He opted to four-bet and made it 340,000 to go. Roberts took some time and then folded his hand, allowing Fox to chip up.

Roberts Getting Picked On

Brian Roberts is having a little bit of an issue with the placement of his chips and the hole card cam. He's been asked several times to slide around and do a better job of letting the camera peek, but he's finding it difficult with the layout of the table. Roberts is cornered in the eight seat, and with a high rail and low chairs, it's visibly difficult for him to handle chips and cards on the felt in front of him. He's explaining his issues to the crew, but they're still bothering him to adjust.

Roberts appears to be getting a bit frustrated with the lecture he's receiving, and a slight scowl has come across his face.

Hand #6: Shawn Buchanan had the button. Jake Cody raised to 60,000 in the cutoff and Buchanan riffled some chips before making a three-bet to 155,000. Both of the blinds folded and the action fell back to Cody. Cody eyed up the shortest stack at the table, checked his cards and then quickly threw them to the dealer.

Hand #7: Moritz Kranich had the button but it was Shawn Buchanan in the cutoff who raised to 65,000 and picked up the blinds and antes.

Hand #8: Chris Moorman had the button. Dermot Blain raised to 65,000 in early position. The action folded to Moritz Kranich in the cut-off and he cold called and we had a two-way flop. The flop was

and the action was on Blain to act first and he reached for chips before betting 95,000 and Kranich quickly folded.

Hand #9: Brian Roberts had the button but it was Jake Cody who raised to 60,000 from early position and nobody fancied tangling with the lad from Rochdale except Elio Fox, and he made the call from the big blind. The flop was

and Fox checked to the initial raiser Cody who stared at the board for a while before betting 75,000. Cody then averted his stare back to Fox who made the call. We were going to have a turn card and it was the

, Cody was tranxfixed with Fox who just stared at the board before reaching for chips and betting 175,000. Cody, mouth slightly open, switched glances from the board to Fox before deciding to fold and the chip leader won the pot.

Hand #10: Max Silver had the button. Chris Moorman was the first man into the pot from the cutoff. The bet was for 60,000 and when the play landed at the hands of Max Silver he three-bet to 165,000. Moorman asked Silver for a count before four-betting to 365,000 in total. Silver peeked at his cards before moving all-in and Moorman called.

Silver is eliminated in the first level of the final table. 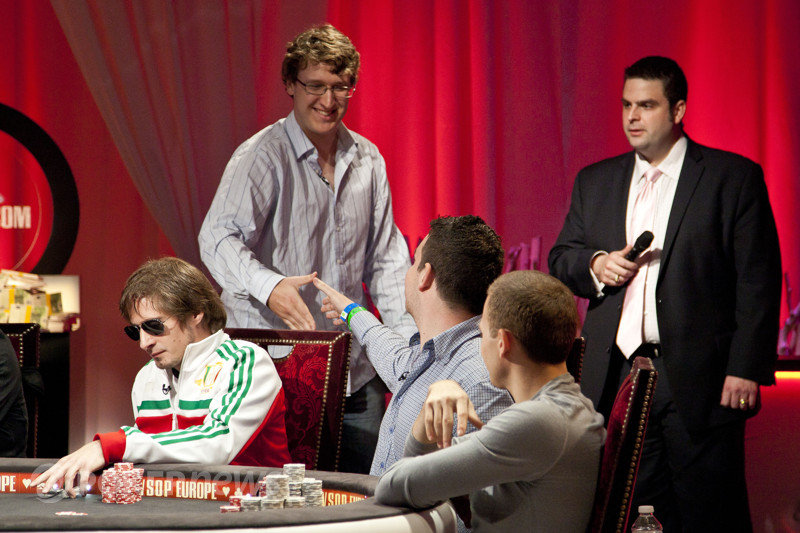