Eight Remain at the Final Table of the Big One for One Drop; Esfandiari Leads

Eight Remain at the Final Table of the Big One for One Drop; Esfandiari Leads

The official final table for the $1,000,000 Big One for One Drop has been set after just about 12 hours on the felt. With a little more than 17 minutes left in Level 18, the final elimination occurred with Mike Sexton falling in ninth place. But first, let's recap the day.

When the day began, 37 players remained for the start of Day 2. The money line was set at nine, so everyone hunkered down for what was expected to be a long day of poker. Little did everyone know that the chips would be flying early.

On the very first hand of the day, Chamath Palihapitiya was all in with the

for John Morgan. A board of

ran out and Palihapitiya headed to the rail.

Next to go was Vivek Rajkumar and then a big one went down between Mikhail Smirnov, Tom Dwan and Daniel Negreanu that saw the latter two eliminated. In a three-way all-in pot, Dwan held the

. The flop, turn and river ran out

and Smirnov made quads to bust both of his opponents.

Following those eliminations, Phil Galfond, Noah Schwartz, Tobias Reinkemeier and Paul Ruffin went out. Then Morgan, Paul Newey and Gus Hansen all got bounced to bring the event down to the final 26 players.

Phil Ivey could never really seem to get much going on Day 2 and wound up falling in 26th place at the hands of Philipp Gruissem. Ivey had raised to 200,000 from the cutoff seat with the blinds in Level 12 at 40,000/80,000/10,000 and Gruissem reraised to put him all in from the big blind. Ivey called off his last 1.3 million or so holding the

and was up against the

for Gruissem. The board ran out

to give Gruissem a runner-runner flush and the victory in the hand.

After Tom Marchese busted Ben Lamb in 25th place, the field was down to the final three tables. Marchese was out in front with Antonio Esfandiari in second and Brian Rast in third.

From there, Bob Bright, Dan Shak, Smirnov and Rick Salomon all busted before the largest hand of the tournament came up that saw Esfandiari send Jason Mercier out the door in 20th place. Mercier had seven-bet shoved with the

. The pot was worth around 22 million and sent Esfandiari to the top of the counts.

Esfandiari had the chip led with 10 left while Ilya Bulychev was riding the short stack as the largest bubble in poker history had arrived. Then, just a few hands into 10-handed play, all of Bulychev's chips went into the middle and he was called by Sam Trickett. Bulychev had shoved for his last 2.55 million with the

. After a flop, turn and river of

With the money reached and all nine remaining players guaranteed at least $1,109,333, the tournament still needed to lose one more player for the official final table to be set and things to end for the night. That player was none other than Mike Sexton, one of the greatest ambassadors the game of poker has ever seen.

Esfandiari had raised it up to 900,000 preflop and Sexton called from the big blind. The flop came down

and both players checked. The turn was the

and Esfandiari bet 1,150,000. Sexton decided to move all in and Esfandiari called. At first, the dealer thought Esfandiari had folded and he put his cards face down on top of the muck pile. Esfandiari jumped up right away and the floor corrected the dealer, putting his

back onto the table after the floor came over to rule on the situation. Esfandiari had two pair and Sexton showed the

for a pair of jacks and a flush draw. The river was the

and Sexton was eliminated.

Upon making the final table, all eight players have locked up no less than $1,237,333 and it's Esfandiari on top of the pack with 39.925 million. He's trailed closely by Trickett holding 37 million before a big drop off occurs and Guy Laliberté falls in third place with 21.7 million. Those three players are the only ones with above average chips.

Laliberté was the man behind this event from the get go and has done extremely well to find his way to the final table. Not only did he work extremely hard to make the Big One for One Drop happen successfully, but Laliberté buckled down and was all business at the tables for the past two days. For both, he's now reaping the benefits.

When asked about how he felt about making the final table, chip leader Esfandiari said, "It's better than the first time I had sex!" Esfandiari good friend and fellow final table player Brian Rast commented, "This was exactly what I wanted at the start of the tournament."

Trickett, who has several tournaments where he has made final tables with a large stack, described the feeling as "Exhilerating!" and pointed out, I"'ve been in this situation before — coming into a final table with a big stack — I feel comfortable and confident."

Coming into the final day of play, Hellmuth holds 10.925 million in chips, which is good for fifth place out of the last eight. He'll surely be looking not to let anyone down.

Einhorn, who will enter the final table with 8.375 million and in sixth place, has pledged to donate all of his winnings from this tournament to charity. That's quite the gesture and quite the chunk of change to be donated, making him the lead runner for the most feel-good story at the final table. 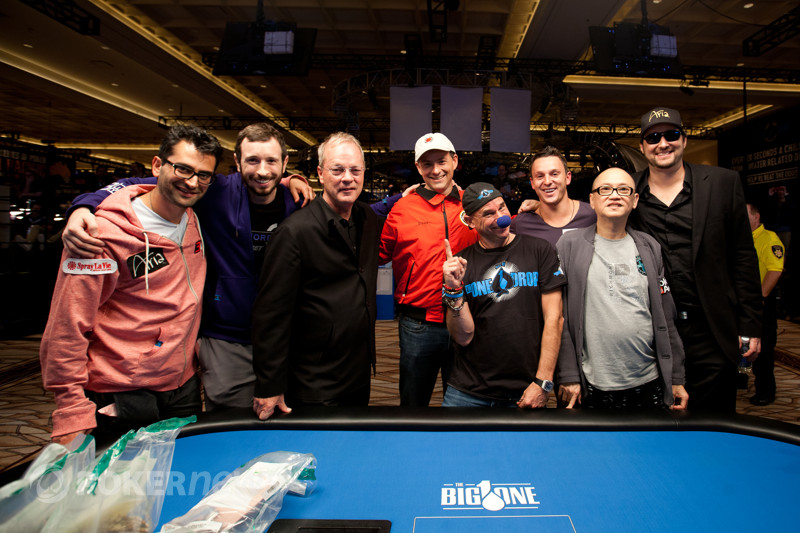 On Tuesday, the players will return at 12:00 PM PT at the Rio to play to the conclusion of the event. The cards are scheduled to get in the air shortly after noon and you won't want to miss a single thing. Be sure to tune into PokerNews all day and night for all of the One Drop coverage you can handle.

Don't forget to check out all of our exclusive coverage from the 2012 WSOP and until tomorrow, goodnight from Las Vegas!

From the small blind, Antonio Esfandiari raised it up to 900,000 and Mike Sexton called from the big blind.

and both players checked. The turn was the

back onto the table. Esfandiari had two pair and Sexton showed

The river was the

and Sexton was eliminated in ninth place. We are down to a final table and the official chip counts will follow shortly.

Mike Sexton raised to 700,000 from under the gun and Guy Laliberté moved all in from the cutoff seat. Action folded back to Sexton and he also gave it up, slipping back under seven million in chips.

Sam Trickett raised to 600,000 from the cutoff and Richard Yong three-bet from the button. Guy Laliberté was in the big blind and he asked how much Yong had behind. Yong had around 5.4 million left behind and eventually folded his cards after having shown them to Brian Rast.

Trickett also folded, and Laliberté claimed he folded queens. Rast confirmed this and Yong might have missed out on a double up, or maybe he would've been in real trouble. We'll never know.

Action folded to Ilya Bulychev in the small blind and he raised all in for 2.55 million. Sam Trickett made the call from the big blind and the chance for the bubble to break had arrived.

Trickett turned up the

. Bulychev had shoved with the

and was looking to double up and stay alive. If not, he'd be forced out as the last player to go home empty handed while everyone else earned over $1.1 million.

On the flop, the dealer rolled out the

and Bulychev picked up some additional outs to a flush. He was now looking for a diamond or a queen with two more cards to come.

The turn card made things even more interesting when the

was added to the board. Bulychev increased his number of outs as he could now hit a five along with the aforementioned diamond or queen.

The crowd was silent and the cameras rolled. The tension in the air was so thick it could be cut with a knife. Along with the tension came intense anticipation of what was to come while the excitement within everyone was brewing within.

The river completed the board with the

and Bulychev had missed everything. Trickett's two pair of sevens and deuces proved to be the winning hand and sent Bulyhcev out the door in 10th place — the official tournament bubble boy.

Brian Rast raised to 600,000 and both blinds, Phil Hellmuth and Antonio Esfandiari, called.

The flop brought out

and Esfandiari lead out for 1,025,000. Hellmuth and Rast folded giving Esfandiari another pot.

Sam Trickett raised to 600,000 from middle position and Phil Hellmuth called from the big blind to see the flop come down

The turn was the

and both players checked to see the

land on the river. Hellmuth fired 1.1 million. Trickett tanked for a bit and then folded, giving the pot to Hellmuth.