And the newest World Series of Poker gold bracelet winner is... Ronnie Bardah!

Coming into the day, Bardah was dead last in chips, which was much in part to losing some big pots towards the end of Day 2. Never the one to let obstacles deter him from reaching his goal, Bardah fought and fought hard. He walked into the Amazon Room with a smile on his face and went right to work, doubling up the first hand and picking up steam from there. Before anyone knew what had happened, Bardah was right in the thick of it all.

When seven players remained after the elimination of Rep Porter in eighth place, play was relocated to the feature stage in the Pavilion Room and Bardah sat second in chips. He stayed in that spot for a good portion of time while Vincent Gironda led the way. Gironda had led after Day 1 and Day 2 as well.

A little under an hour after Limit Hold'em specialist Terrence Chan fell in seventh place, Bardah overtook Gironda for the chip lead by a slight margin. He flopped trip tens and turned a full house before getting a lot of value from his opponent, Gironda. From there, he put his foot on the gas and extended himself from the pack.

The man nicknamed "RoNasty" was the first player over a million and he reached that mark while play was still five-handed. The more the chips were pushed Bardah's way, the more aggression he exhibited. But then, the dinner break came and Marco Johnson came back with a fury.

The show after dinner was the Bardah-Johnson Show, with Gironda taking a seat in the audience as his stack was blinded away. When he finally found a hand to compete with, he couldn't beat Johnson and was eliminated in third place.

Heads up between Johnson and Bardah started with Johnson holding a slight edge, but the battle flopped back and back nearly every hand. To say Bardah was the crowd favorite would be an understatement. His rail was two to three bodies deep and encompassed nearly the entire stage. Every pot Bardah won was followed by a massive uproar while his friends cheered him to victory.

Bardah also made hands, plenty of them. He flopped trips with the

, made a flush on the river holding the

when a fourth club came in, smashed sixes full of fours in a big pot and then nailed another flush with the

. Johnson just couldn't get anything going and when he did, it was going Bardah's way a bit more. But Johnson stayed tough and didn't go away easily.

On the final hand, Johnson raised on the button and Bardah three-bet from the big blind. Johnson called and a flop of

followed. Bardah bet and Johnson called. The turn was the

and that's when the money went in. Johnson held a flush draw with the

and Bardah two pair with the

. All Bardah needed was no club on the river and the bracelet would be his.

His rail was on their feet, pushing hard against the ropes to get a closer look. They chanted for no club to fall and guess what, they all got their wish. The

landed on the river and Bardah made a full house to secure the victory. He threw his arms up in the air triumphantly, shook the hand of Johnson with congratulations and then jumped into a mob of arms hugging him on the rail. Bardah did it. 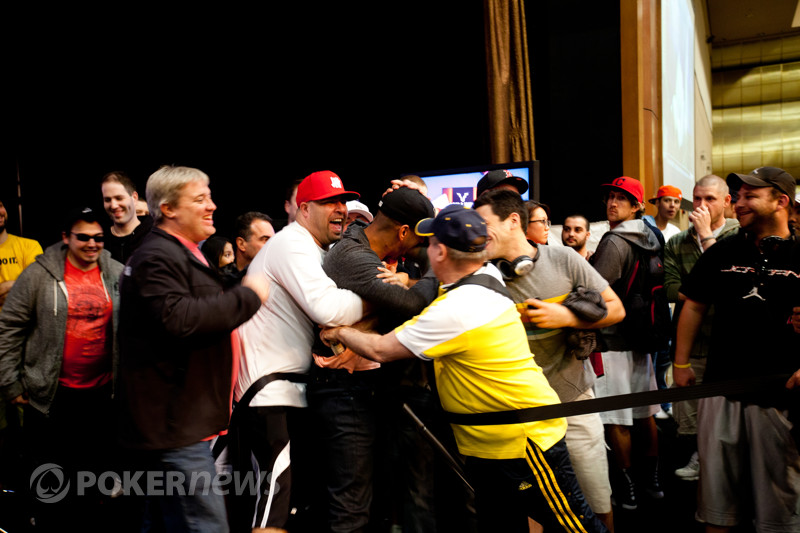 Bardah mobbed by his friends after his win

Coming back from dead last in chips to battle heads up with the man who was second to last to start the day proved to be a great story. In the end, the WSOP title went to Bardah — his first — and he pocketed $182,088.

Prior to this summer, Bardah took a few months off from poker to travel the world and train Muay Thai. He believes it has helped him keep a clear and focused mind at the table, while teaching him a lot about life in general. Bardah recommends the training for everyone and our guess is a lot of people may follow in his foot steps.

Congratulations to all of the winners, but especially to the man from Brockton, Massachusetts, Ronnie Bardah. He's an East Coast grinder who cut his teeth in the game of Limit Hold'em and prefers short-handed play, making it only fitting that his first WSOP gold bracelet was earned in just that game.

Until next time, the PokerNews team would like to thank you for following along and goodnight from Las Vegas! 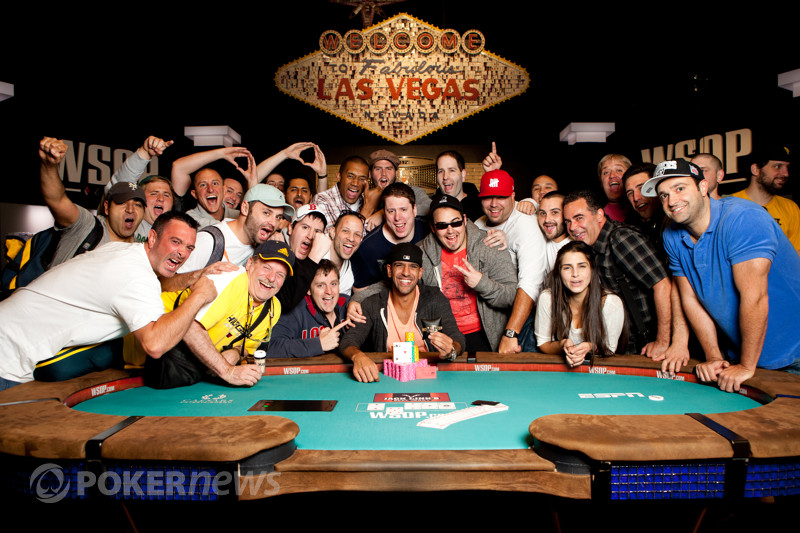