Marc McLaughlin opened to 60,000 from the cutoff, Alan Stevens three-bet to 185,000 from the small blind, and Kyle Cartwright moved all in for 775,000 from the big blind. McLaughlin went into the tank for nearly two minutes before re-shoving for over 2 million, and Stevens immediately called in for 710,000.

Cartwright and Stevens were at risk, and both players stood up and put their hands on their heads. Dozens of people crowded around the rail as the dealer rapped the table and delivered a flop of

There were shouts coming from every direction. "Queen! Ten! Jack!"

The turn was the 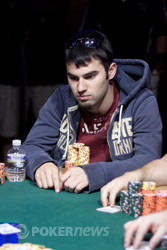 The river wasn't a deuce, but it was the

however. McLaughlin exploded, running to his rail to celebrate the double knockout. Stevens looked content with his 9th place finish, while Cartwright was visibly shook by the thunderous river card.

A wave of chips was pushed towards McLaughlin, and he is now our chip leader with over 3.5 million to his name.