Day 3 of the PokerStars European Poker Tour Barcelona Main Event started with 292 players still in contention for that illustrious 100th EPT title and €1,261,000 first-place prize. With just payouts reserved for 239 players, 53 players would not only fall short of the accolades, but also of any cash at all.

Many more would follow before bubble time was there. Canadian EPT regular Yann Dion ran his ace-queen into ace-king, Dutch sit-n-go expert Martijn Ardon saw a big bluff fail against Timo Pfutzenreuter, and Angel Guillen and Olof Haglund didn't make any dough, either.

It didn't even take all that long before the clock was paused and the hand-for-hand process started. The bubble boy was set to not go home empty handed though, as the organization had a Seminole Hard Rock Poker Open Main Event ticket worth $5,300 and custom-made electric guitar ready for the unfortunate soul to bust last before any loot was paid out.

Bubble pandemonium
What followed can only be described as a pandemonium. In a remarkable turn of events, the tournament saw six all-in situations at once, which led to some serious complications for the bubble and the tournament.

On the first table, Francois-Charles Scapula and Daniel Studer were all in and at risk against former World Series of Poker November Niner Sylvain Loosli, who called covering both players.

, allowing for Loosli to win the pot and eliminate both short stacks, but this is where things got interesting. There was some confusion as to who was the shortest of the two stacks, but it was eventually confirmed that Scapula had just 1,000 more than Studer.

On the next table to run out an all-in hand, Farid Chati was all in on an

board against former EPT winner Martin Finger. Chati turned over the

for a king-high flush, but Finger flipped over the

for a straight flush to the astonishment from all surrounding the table. That meant after two of the six showdowns, three players had been eliminated.

The third table saw Randal Flowers all in with the

. His mood had been brightened by the fact that several players had already been knocked out, guaranteeing the American some sort of prize. Philippe D'Auteuil was the one who had made the call with his

, and Flowers said, "I'll take two hearts," but the turn was the

and the river was the

. That meant a fourth elimination was confirmed, with more all-in situations to play out.

The next two all-in hands — both on different tables — saw double ups for the short stacks, leaving just one more to go. Pawel Brzeski had put Richard Dubini at risk and Dubini called it off, but he had an agonizing wait while all of the other hands played out. Eventually, he was able to turn his cards over and see what he was up against, and when that time came he saw his

for Brzeski. The final board was

and Dubini joined the other players eliminated on the bubble. 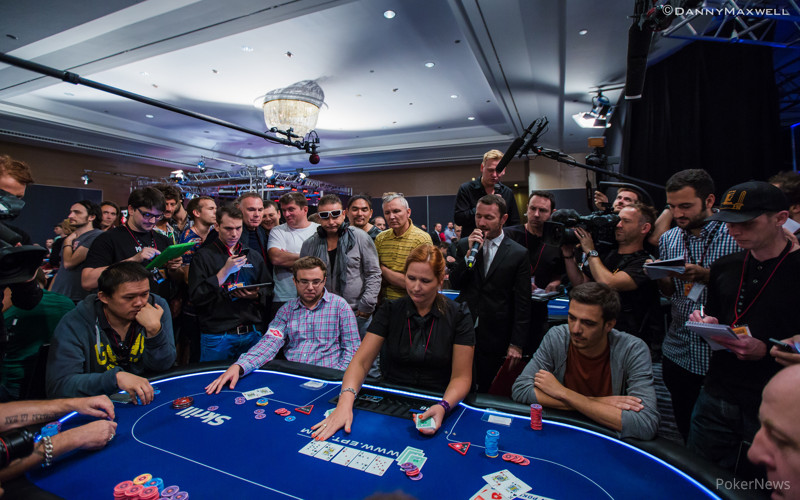 Five players were eliminated on the bubble, but with two of them coming from the same table, it's a very unique situation as to who would get what. The bubble was to receive a guitar and $5,300 seat in the Seminole Hard Rock Poker Open $10,000,000 guaranteed event in Florida this week, so the tournament staff was left to sort out the mess.

It was decided that the five players would take the money from the first four in-the-money spots (€8,050 times four for €32,200) and divide it evenly amongst them, taking €6,440 each. Then the five would play a sit & go for the guitar and the $5,300 seat. This ruling raised some questions because it was ignoring the "bigger chip stack" rule that applies to situations in which two players bust from the table on the bubble or in the money.

In the end Francois-Charles Scapula from France beat Randal Flowers heads up to grab the guitar and the Seminole Hard Rock Poker Open ticket on top of his €6,440 prize - effectively making him more than many of the players that busted after him. The Frenchman was undecided if he was to travel to Florida to play in the event, or that he would try to sell it.

Bust outs
As usual, many players quickly busted after the bubble had burst. Niall "firaldo" Farrell, who won the FTOPS Main Event for $236,000 back in April, was one of the first to hit the payout desk que. He was getting in line behind the likes of Thomas Brader, Timo Pfutzenreuter, and David Peters, though, but all got the €8,050 min-cash for their efforts.

Characters like Kitty Kuo (ace-queen into kings), Dan Shak (top pair and flush draw missed against turned flush), and a furious Sergey Frizyak (the dealer open mucked someones hand, but it was correctly ruled live anyway) also left the stage before the fifth 90-level for the day was in the books.

Surging
Where people fall, other people surge - as usual in a poker tournament. This biggest EPT on European soil event was no different. EPT Prague winner Martin Finger was one of 'em, gaining lots of chips on the bubble, and winning a big hand with...

. After calling a four bet with that potential monster, he got his opponent to put in all of his chips in betting a king high flop and turn with pocket tens.

EPT Berlin winner Davidi Kitai also had a day full of prosperity. Where the Belgian bracelet winner might not perse be known for his small ball steady grind, he today showed he was very much capable of an approach like that as well. After emptying the clip in a hand early on, where his river shove wasn't called - so we don't know if he had it or not, he mostly played small pots to get to 1.2 million.

Finger and Kitai aren't the only former EPT champs still in, though the quest to become a two-time winner has lost its glance after Vicky Coren became the first one to do it in last seasons EPT Sanremo event. EPT London winner Robin Ylitalo (338,000), EPT Barcelona winner Mikalai Pobal (163,000), Mike McDonald (495,000) and EPT Tallinn winner Kevin Stani (421,000) is also through to Day 4.

Leading the charge is Andrei Konopelko from Belarus, who gathered 1,451,000 in chips throughout the first 18 levels of the tournament. Piotr Sowinski from Poland is right on his heels with 1,315,000 in chips, and be sure not to forget about German Team PokerStars Pro Jan Heitman with a respectable 953,000 in chips.

Day 4: Main Event and $10,000 High Roller
The tournament continues noon local time August 25th, with the goal for the day being to lose as many players as possible. Last year it was Tom Middleton who lead the final 24 (and eventually win) after Day 4, so the organization will most likely try to get down to as close as possible to that number this year as well.

PokerNews will again be on sight to supply you with all the updates you can wish for, photos from all the players and important moments, and interviews with everyone thats making waves.

The Main Event won't be the only tournament in Barcelona you may expect updates from though, the €10,000 High Roller starts at 1 p.m. local time, and we'll be on board from the get go to see who manoeuvres himself in the best position to succeed Thomas Muehloecker as EPT Barcelona High Roller champion.

Souki Almost Trebles at the Death

A three-way all-in in the penultimate hand saw a big pot shipped the way of Philippe Souki.

and Souki scooped, eliminating Skommo and doubling up through Kell at the same time.

The players have finished for the day and are bagging up their chips. Chip counts and a recap will be posted shortly.

The tournament is getting ready to wrap up for the night, they're playing the last three hands.

needing to hit because Sowinski flipped

The Spaniard couldn't find one of his ten outs on the

river and Sowinski picked up a huge pot to put him close to chip lead.

Lenny Kravitz once sang, "It Ain't Over Til It's Over" and Scott Seiver just found out exactly that. He was all in with

and Seiver jokingly turned Neumann's cards face down. The

turn didn't change anything but the

river was greeted with some laughter, from Seiver and Neumann as much as anyone else.

Seiver was eliminated and Neumann moved back over 500,000.

and Ismail Kalkan the

The final board read

and with Kalkan having the smaller stack he was headed to the payout desk with no complaints.

All of Raigo Aasmaa’s chips were in the middle before the flop had been dealt. He was in possession of

. Nothing would stop him as the turn

saw Aasmaa fall by the wayside.