The Final Six Battle It Out at 2 p.m.

The final two players are extremely deep. As such, they've opted to take a moment to talk numbers. Cards should be back in the air shortly. 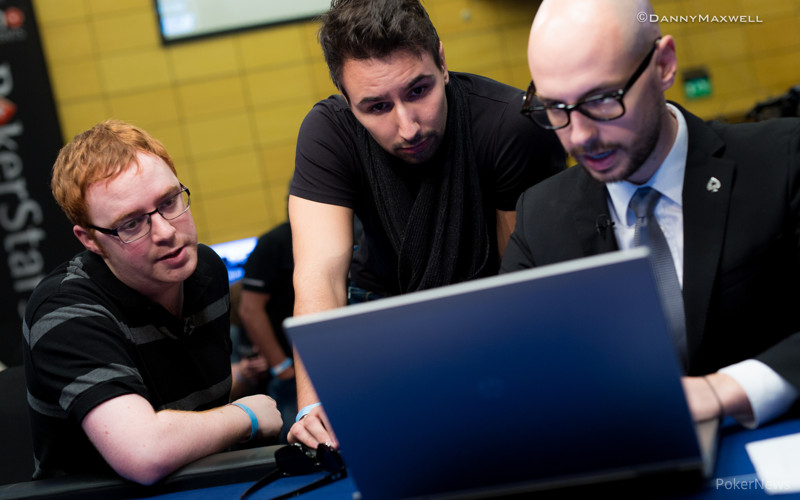 , Alen Bilic raised from the small blind and won the pot.

Hand #32: Jaroslaw Sikora limped from the small blind with the

and Niall Farrell exercised his option from the big with a raise to 240,000 with the

. Sikora immediately moved all in for 1.585 million, and Farrell snap-called.

Sikora had major kicker issues, and the

flop didn't do anything for him. The

turn was a blank, and the

river wound up being the last card Sikora would see in the EPT12 Malta Main Event.

and action was on the shorty in the small blind. Giulio Spampinato found

and called rather quickly. Farrell laughed and instantly folded his hand.

Giulio Spampinato, surrounded by his friends and family, wished for an ace, but it wouldn't come. The board came

Hand #28: Niall Farrell received a walk in the big blind with

under the gun and he took down the blinds and antes.

The Route to the final

The PokerStars Blog took a look at the path the final six took to reach the EPT Malta Final Table, check it out here.

The four remaining players are on their first break of the day.

Hand #27: Farrell looked down at the

under the gun and raised to 130,000. Rainer Kempe then picked up the

in the cutoff and three-bet to 300,000. Action folded back to Farrell and he paused for a few beats before moving all in. Not surprisingly, Kempe snap-called off.

Kempe, who became just the eighth player to make back-to-back EPT Main Event final tables (he finished fifth in the EPT12 Barcelona for €320,400), was in desperate need of a queen, but it never came as the board ran out

With that, Kempe finished fifth in back-to-back EPT Main Events, this time for €161,340.

displaying, made it 125,000 to go under the gun and he picked up the blinds and antes.

Hand #21: Alen Bilic received a walk in the big blind with

so more blinds and antes for the man from Bosnia and Herzegovina.

. Jaroslaw Sikora called from the big blind with

pairing no one. Bilic made a continuation bet of 175,000 and Sikora called. The

on the turn was a blank and Bilic and Sikora both checked. The

completed the board and Bilic fired 350,000 into the 710,000 pot. Sikora folded rather quickly, the bluff worked for Bilic who moved over the 8 million mark with that pot.

Hand #23: Farrell received a walk with

in the big blind. "My button is broke[n]" Sikora said with a smile.

for Niall Farrell in the small blind and he raised to 180,000. Rainer Kempe folded

from the big blind.

and took down the blinds.

and Alen Bilic defended from the big blind with the

to see a flop of

, which both players checked. When the

appeared on the turn, Bilic bet 155,000 and Sikora released.