Day 3 Ends With D’Auteuil in the Lead

D’Auteuil was in the middle of the pack at the beginning of Day 3, but he quickly ascended to the top of the ranks. In one particular hand, he had Esteban Ripamonti all in and at risk with the board reading

, and the turn and river came the

respectively. D’Auteuil raked in the massive pot, pushing his stack above 700,000 chips, and he soon crossed the million-chip mark.

The day began with 183 players, just 23 players short of the money, and the bubble burst during the first level of play. Faraz Jaka entered play as the chip leader, and never fell out of the top five in the chip counts. Despite doubling a couple of players, including Team PokerStars Pros Barry Greenstein and Javier Dominguez, Jaka was able to pick up plenty of pots to finish the day with 1.22 million chips. Jaka is a very dangerous player and an absolute nuisance for his opponents when he has chips.

The last women standing, Xuan Liu, also went on a heater towards the end of the day. After floating around the 200,000-chip mark, she eliminated Mikhail Shikhworich to eclipse 600,000 chips. Shikhworich three-bet jammed 242,000 with

and Liu, the original raiser, called with

. She held as the board ran

Pat Pezzin, Robert Rosen, JC Alvarado and David Inselberg were among the two-dozen players that failed to cash, while plenty of notables made trips to the cage, including Shane “Shaniac” Schleger, Leif Force, Liv Boeree, Randy “nanonoko” Lew and 2011 November Niner Phil Collins.

There are a couple members of Team PokerStars still fighting for the 2012 PCA Main Event title. Greenstein went on a big heater in the middle of the day, peaking at 550,000. He lost a hand to Mr. Jaka late, however, and bagged up 379,000 chips. Dominguez, Luca Pagano, Jan Heitmann and Arnaud Mattern also survived, and will look to defend their home turf tomorrow. Spanish professional golfer Sergio Garcia also still remains with 235,000 in chips.

Furthermore, still in the hunt is last year's champion Galen Hall. He won $2.3 million last year, came in third in the $100,000 Super High Roller this year for $470,400 and is still alive in the final eight tables of this field. Hall will only return with 168,000 in chips(well below average), but he's still got nearly 17 big blinds and plenty of fight left in him.

We will resume tomorrow at noon local time, where we will play down to 24 players. Until then, goodnight from the Atlantis! 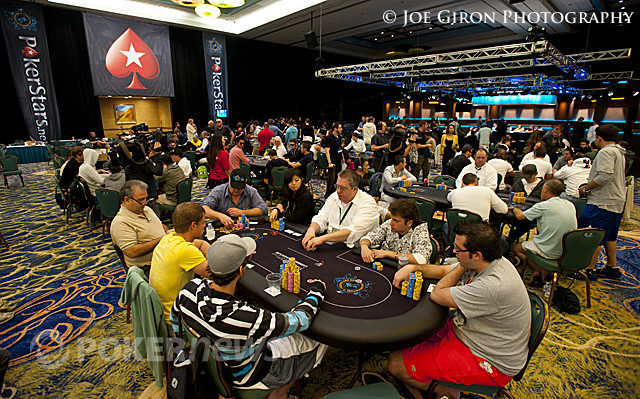 The tournament field is now down to 64 players, which means things will be ending for the night. The remaining players are now bagging and tagging for the night. We'll have a complete wrap coming for you shortly.

On the main feature table, Nikolai Senninger was all in with the

against Team PokerStars Pro Luca Pagano with the

. Pagano paired his ten on the

hit the turn and

the river. Pagano won the pot, collected the chips and sent Senninger to the rail.

It's been a quick tumble from above-average to out for Mikhail Shikhworich.

It was Xuan Liu who got the last of his chips, and she opened the pot to 20,000 under the gun. Shikhworich just went ahead and shoved all in for 242,000 from the small blind, and Liu made the call with

. That was not at all good news for Shikhworich, and his

had him five cards from the exit.

Liu never had to sweat as the board ran out

, and she's sent another player packing to move up to about 645,000. She's the last lady standing, and she's got plenty of chips to do some damage now.

One More To Go

The tournament field is down to 65 players. One more elimination and the remaining bunch will be bagging and tagging for the night.

David Peters made it 20,000 to go on the button before Sergio Garcia pulled out his driver from the big blind and mashed all of his chips into the middle. He was all in for 114,000 and Peters made the call.

The flop kept Garcia in the lead when the

fell. No ace or jack came on the turn when the

landed, but even that card helped Peters a little bit as it added him some outs to a gutshot. Needing an ace, jack or deuce, Peters couldn't find what he needed when the

fell and Garcia was able to double up.

From the cutoff seat, Alex Fitzgerald opened to 22,000, and Alexey Sudarikov three-bet shoved for 128,000 out of the blinds. Fitzgerald had plenty of chips to make the call with

, and he was flipping for the knockout against Sudarikov's

And the knockout he would get. The

flop was safe for the at-risk player, but Fitzgerald drilled the turn